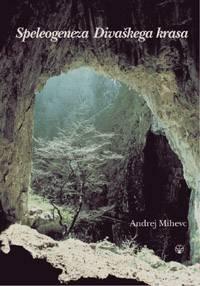 
Author describes the evolution of the caves and karst surface of the Divaški kras, an area above caves Škocjanske jame and Kačna jama. This karst is with 18 km of known cave passages, accessible to the depth of 280 m, one of the most interesting karst areas in Slovenia. There are descriptions of the oldest caves that are because of the denudation of the surface in shallow depth or surface already cuts trough them. These unroofed caves, which can be found there, enable the reconstruction of the oldest phases of the karst formation. In following chapter cave system of Škocjanske jame – Kačna jama is presented. In these two caves was with the analysis of the geological structure and comparison of the for these two caves geological structures, passage morphology, and recent sediments were sediments analysed in order to get evolution of the caves. Special attention was paid to the large chambers, canyons and collapse dolines. The hydrology of the underground river Reka is described, especially the bifurcations to several separated streams. In special chapter there are results of the datations of the stalagmites and other flowstone which dates some phases in cave evolution and well reflects the past climatic changes. In well designed book with rich photographic material an extensive bibliography is added and summary in Slovene and English language.