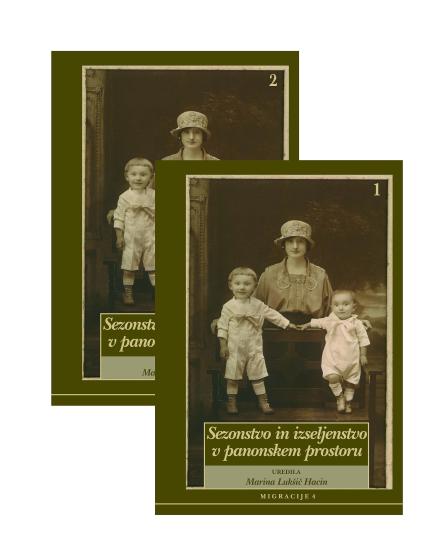 
The work introduces expanded treatises of the international conference of the same title, organised by the Institute for Slovenian Emigration Studies ZRC SAZU (Ljubljana), the dr. Šiftarjeva fundation (Petanjci), and by the Institute for Migration and Ethnic Studies (Zagreb). The conference took place in Radenci from October 22nd to October 25th 2002 under the auspices of the President of the Republic of Slovenia Mr. Milan Kučan. Authors from different countries: Argentina, Austria, Croatia, Italy, Japan, Hungary, Germany, and Slovenia took part in it.

The Ariadne’s thread takes us from the processes of the formation of a multicultural image of the Panonian space through historical perspective, through analyses of seasonal work and emigration by different groups and contexts, to the situation after World War II, and all to the present time. An analysis of migration dynamics by groups and contexts leads us from the population of the Prekmurje students in Hungary and in Slovakia, the Prekmurje Slovenes in Argentina, and Slovene (Prekmurje) nuns in France, to the migration situation in Porabje and in Gradiščansko. Next are analyses of particularities of migration dynamics by individual ethnic groups or communities: Jewish, Romany, German, and comparisons of circumstances in which Carinthian Slovenes and Hungarians live in Prekmurje. The time after World War II is presented within the context of international migrations from economic and sociologic viewpoints, and in comparison to interior migration dynamics by Slovene regions. The discussed region is at present facing intensive cross-border labour migration, and the problem of employment or unemployment.
The second part of the analysis of migration dynamics in Panonian space is literary-historical. The authors are thus dealing with seasonal work and emigration in literary works, with reviews of emigration writers and learned persons, and with portrayals of emigrant writers.
The presented treatises are followed by a framework in which emigrants themselves speak about them, or about the life of emigrants. Their life is in continuation presented in reports on researches of secondary school pupils, and in the presentation of the exhibition Honey and Salt – Memories Preserved by Pomurje Emigrants that accompanied the conference. The collection of papers is concluded by an exhaustive review of works on seasonal work and on emigration in Prekmurje.