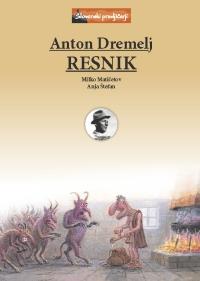 
The first volume in the Slovenski pravljičarji (Slovene Storytellers) collection of monographs contains tales recounted by Anton Dremelj-Resnik from Petrušnja Vas in Dolenjska. The esteemed academician Milko Matičetov has pronounced Resnik the best storyteller he has encountered during his field trips in various Slovene regions prior to his research work in Resia. The material in this book encompasses a rich palette of genres from short humorous folk tales, legends, historic tales, and anecdotes to the epically evolved animal tales and tales of magic. The book is prefaced with an extensive study, written by Anja Štefan, titled O pripovedovalcu, zbiranju in objavi njegovih pripovedi (On the Storyteller and on Collecting and Publishing His Folktales). In order to be understandable for every reader, the narratives have been set on paper in a consistently simplified dialectological system of the language spoken in the region of Dolenjska.