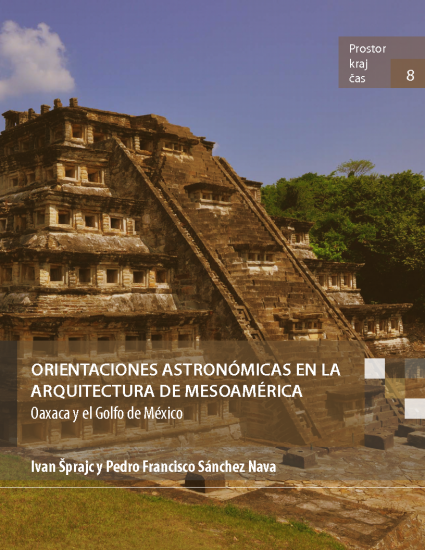 
This monograph presents the results of a systematic study of orientations in prehispanic architecture of two sub-areas of Mesoamerica. The alignment data for a number of civic and ceremonial buildings were collected with field measurements at 42 archaeological sites in the cultural regions of Oaxaca and the Gulf of Mexico.

Assuming that each is characterized by certain cultural peculiarities, we analyzed the data from the two regions separately, employing a more rigorous methodology than most of the former studies. The results of the analyses indicate that the orientations were functional predominantly or exclusively in the east-west direction, largely marking sunrises and sunsets on certain dates, but the existence of some orientations to lunar standstill positions on the horizon is also very likely. The distribution of intervals that delimit the dates recorded by solar orientations exhibits concentrations around some multiples of 13 and 20 days. The distribution of dates in the year, the similarities with alignment patterns in other parts of Mesoamerica, and contextual data, including ethnographic information, suggest that the orientations recording the Sun’s positions had a practical function: allowing the use of observational calendars composed of elementary periods of the formal calendrical system and their multiples, they facilitated the prediction of important dates in the seasonal cycle and, thereby, an efficient scheduling of agricultural activities and the associated rituals. In many cases the buildings’ main facades or entrances face the directions argued to have been astronomically functional, thus reinforcing our interpretations. At some sites we noticed that, observing from the main building or architectural group, a prominent mountain top on the local horizon corresponds to the Sun’s position on the dates that, for being commonly recorded by architectural orientations, must have been significant and which, moreover, could have been incorporated, together with those recorded by orientations at the site, in a single observational calendar composed of calendrically significant intervals. These cases, as well as the structures oriented not only astronomically but also to a prominent horizon feature, imply that some buildings were erected on the places selected on the basis of both astronomical and topographic criteria. While some conspicuous peaks are located along the buildings’ east-west axes and could have served as foresights facilitating observations, others are placed along the north-south axes, suggesting that the alignments to the mountains, in general, may be explained with the latter’s aquatic and fertility symbolism, an important aspect of the Mesoamerican world view. Even if the orientation patterns in Oaxaca and along the Gulf Coast exhibit some differences, the norms dictating the orientation – and often also the location – of important buildings were evidently based on the same principles, in which the astronomical and calendrical considerations were intertwined with the concepts about the surrounding landscape. Aside from providing a deeper insight into the ideas involved in the architectural design and urban planning in the two research areas, the results of our study shed light on general trends in the evolution of orientation practices and on shared and divergent developments in different regions, thus contributing also to the understanding of the processes of cultural interaction along the history of Mesoamerica.