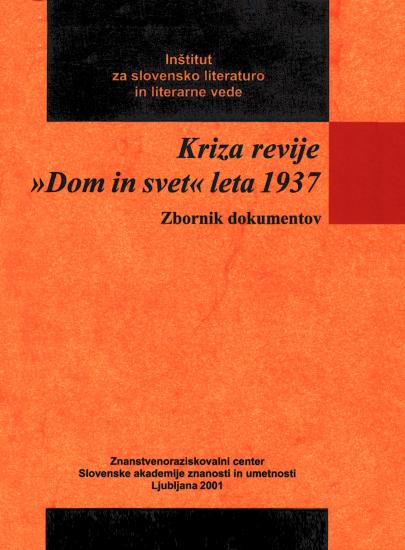 
The book assembles documents related to the crisis of the Catholic-oriented magazine Dom in svet (Home and World, 1888-1944). Alongside the politically liberal Ljubljanski zvon (Ljubljana Bell, 1881-1941), it ranks as Slovenia's foremost literary and cultural publication in the first half of the 20th century. The crisis of Dom in svet, already looming in the twenties, became more apparent in the first half of the thirties.

In 1937, spurred by the issue of the Spanish civil war, it burst out. It was then that the poet Edvard Kocbek (1904-1981), a Christian Socialist, published in the magazine his Premišljevanje o Španiji (Reflections on Spain). By challenging the position of the Spanish Catholic Church, this article, based on French leftist sources, split Slovenian Catholics into two camps. The first one condemned the revo¬lution in Spain, its republic and the violence aimed at the Spanish Catholic Church, while the second one backed the revolution, censuring the Catholic Church for opposing it. The split among Slovenian Catholics, which set off the crisis of the magazine, was the beginning of the fateful schism that reached its highest point during World War II. Following the German and Italian occupation of Slovenia, one part of Slovenian Catholics refrained from participating in the anti-Nazi and anti-Fascist struggle, seeing it as a cover for a Communist-led revolution. The other part cooperated with the Communists, who took advantage of them during the war and even more so after it, making enemies out of them. They eliminated Edvard Kocbek, the leader of those Catholics, from public life, both political and cultural.

All this makes the 1937 crisis of the magazine Dom in svet significant not only for Slovenia's literary history, but also for its cultural and political past. The publication of documents pertinent to it will facilitate the work of re¬searchers.

The subdivisions of the book were dictated by the wish to bring the reader as close as possible to the issue and to make it easier for him to get acquain¬ted with Slovenia as it used to be in the thirties. Its first part, Spominski zapisi o krizi revije Dom in svet {Retrospective Writings on the Crisis of Home and World Magazine), presents accounts (I-VI) written several years or even decades after the crisis. Based on the principle of synthesis, this compre¬hensive survey makes it easier to grasp the broad range of events surrounding the magazine. The second, third and fourth parts of the book contain accounts directly related to the crisis. The writings in the second part, Začetek krize -polemika o križarskem gibanju {The Beginning of the Crisis - Polemics on the Cross Movement, VII-XV), mostly deal with the so-called Cross Move¬ment, named after two publications: Križ na gori {Cross on the Mountain, 1924-1927) and Križ {Cross, 1928-1930), aimed at ridding the Catholic Church of its institutional rigidity and bringing more authentic personal faith into it. After the demise of both publications, some supporters who remained faithful to the original ideas of the movement joined Dom in svet. Attempts to evaluate the Cross Movement triggered a polemic that was the first tangible sign of the Dom in svet crisis. It kept rising during the Spanish civil war, which Edvard Kocbek analyzed in the article Premišljevanje o Španiji {Re¬flections on Spain, Dom in svet, 1937). The third part of the book, Stopnje¬vanje krize - polemika o španski državljanski vojni {Progression of the Crisis - Polemics on the Spanish Civil War, XVI-XXXVIII), covers reactions to Kocbek's article and to the Spanish issue. The fourth part of the book, Vrhunec krize - polemika o reviji Dom in svet {Culmination of the Crisis — Polemics on Home and World Magazine, presents the articles which fueled the polemic (XXXIX-XLVIII) concerning the ideological orientation of Dom in svet and its existence. After a break the magazine resurfaced, although the publisher pushed aside its long-serving editor, France Koblar (1889-1975), in favor of a new editor.

Though the articles were published half a century ago, they are nowadays very rare and hard to get, so that reprinting them was a must for getting an overall picture of the situation. Koblar's extensive article, which opens the book, stands out among previously unpublished writings. It first unveils the roots of the crisis, unknown to the public, and then goes on to chronicle it. As an extensive first-hand reconstruction of events, it deserved to be published, even though the article is a torso and the author drew a lot of data from it for the special chapter in his memoirs, Moj obračun { My Reckoning, 1976), which he dedicated to the crisis of the magazine. The documentation and correspondence from Koblar's legacy, which was not included in the booklet Dom in svet v letu 1937 {Home and World in the Year /937,1938), have also been published for the first time.

All documents have been printed in the language used at the time they were written or first published, though it differs from modern usage. Only missing punctuation marks were added.

Although the documents in the first part of the book were mostly written several decades after the crisis of Dom in svet, they have been arranged just as those in the other parts of the book - according to the time of their con¬ception. To highlight the views advocated by both publications, the articles published in 1937 in Straža v viharju {Sentinel in the Storm) and Mi mladi borci {We, Young Fighters) have been reprinted in chronological order as a whole. The numbering of all documents in all the parts of the book with a uniform sequence of Roman numerals apparently conceals the separate chro-nologies of part one on the one hand, and parts two, three and four on the other. Such a numbering system was used to avoid repeating comments and make it easier for the reader who does not study all the documents chrono¬logically but only selected ones to understand particular passages. This is the reason why many notes have been abbreviated according to the following system: if the reader first starts reading document X and comes across the footnote “Prim. op. 111:13”, (“Ref. fn. Ill: 13”), it means he should refer to footnote 13 in document III, since it also explains the relevant part in docu¬ment X. For practical reasons the previously unpublished documents from Koblar's legacy are joined under one single Roman numeral (XLIII), but in such a way it is no problem to find a particular document with the help of notes and the index.

Edvard Kocbek added numbered footnotes to his Premišljevanje o Španiji {Reflections on Spain). To avoid any confusion with our numbered footnotes, we incorporated Kocbek's comments (after marking them with an asterisk and putting them in square brackets) into his article, of which they are an integral part.

Prof. Ana Koblar Horetzky, the daughter of the editor of Home and World, kindly let us use her father's files. As an expert on the literary, cultu¬ral and political scene of the period, she annotated the documents. The study accompanying the documents is by Dr. Matija Ogrin, a researcher of this period.