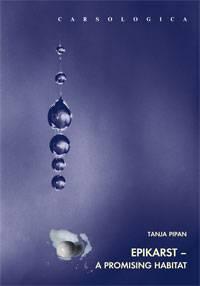 Epikarst – A Promising habitat. Copepod fauna, its diversity and ecology. A case study from Slovenia (Europe)


The book represents a detailed study of the fauna of drips and drip pools in six caves in Slovenia. Drips and drip pools are important because they are just about the only way of assessing the epikarst community. Using a special sampling device, it was possible to sample individual drips for extended periods of time. A total of 37 species of copepods were found in drips and drip pools. Significant differences in the fauna between drips and pools, presumably because of differential survival and reproduction in pools were found. Somewhat surprisingly it was found that the kind of pool, e.g., mud-bottomed compared to calcite bottomed, made little difference.

An unexpected result that the similarity of the epikarst copepod fauna is unrelated to geographic distance is discussed. Caves a few kilometers apart have no more similar fauna than caves tens of kilometers apart. In fact, similarities are generally low among caves, implying that that any similarity among the epikarst fauna must occur at smaller distances. This is part of a recurring theme of heterogeneity in epikarst copepod abundance and composition, both spatial and temporal.
The core of the study is multivariate statistical analysis of the environmental determinants of copepod species composition and abundance, which begins to make sense of the incredible variability of copepod fauna. The primary statistical tool was canonical correspondence analysis, a widely used procedure that allows a detailed interpretation of the relationship between copepod species, environmental variables, and caves.
Also of considerable interest were Pipan’s estimates of species richness of the epikarst copepod fauna. Estimating species richness is a very important research topic in the general field of biodiversity studies, and she utilizes the now standard species accumulation curves and “Chao2” estimates of species richness. As an example, using the stygobiotic copepods collected at individual drips, the “Chao2” estimate is 41 species, of which 23 have been observed. At least this puts some plausible bounds on the incredible species richness of this fauna.
All in all, study represents a major step forward in understanding epikarst communities, and used technique of continuous sampling of drips and the concomitant measurement of environmental parameters proved most illuminating. It probably raises as many questions as it answers, and this helps to set the stage for future research.
– from the review by prof. David C. Culver in Subterranean Biology, 2005

Introduction to the Copepods

Copepods in Subterranean Habitats and their Adaptations

Survey of Researches of Copepods in Slovenia up to the Present

GEOGRAPHICAL LOCATION OF THE RESEARCH CAVES AND DESCRIPTION OF RESEARCH METHODS

Abundance in Different Types of Pools

Differences in Faunal Composition between Drips and Pools

Ecosystem Structure and Dynamics of Epikarst