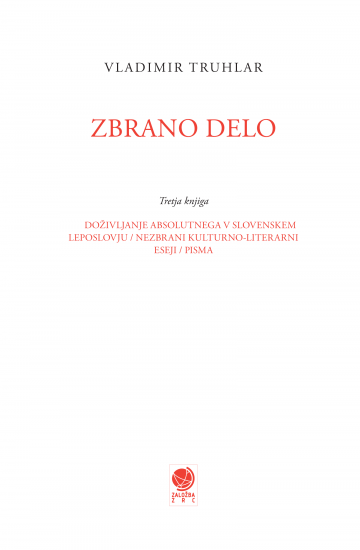 
This third volume concludes the Collected Works of Vladimir Truhlar (1912–1977). For the most part it contains Truhlar’s literary and cultural essays, and his letters are also included. First and foremost his book of essays Doživljanje absolutnega v slovenskem leposlovju (Experiencing the Absolute in Slovenian Fiction) is presented, in which he analyzed twenty-one Slovenian classic authors from France Prešeren and Simon Jenko to Ivan Hribovšek and Gregor Strniša, all from the viewpoint of the existential “bottom” or the basis of the poet’s language, which mirrors or expresses the “absolute” or the transcendental. This means that Truhlar studied the majority of classic Slovenian works outside the postwar doctrine of socialist realism, which was definitely a surprising exception when the book was created (1974–1975) and in a sense continues to be an exception even today. This is followed by uncollected essays on literary culture that Truhlar published in the Slovenian press outside Yugoslavia. The publication of his letters contributes significantly to revealing the author’s personality, but this of course was only possible within the scope available to the editor. The volume thus presents the oeuvre of a modern Slovenian poet, whose inspiration differs profoundly from the orientation of his contemporaries.