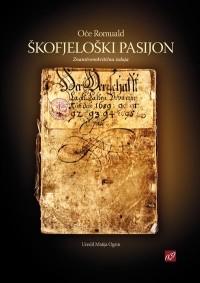 
Father Romuald from Štandrež near Gorica (1676–1748) was a Slovenian Capuchin monk who was active in Škofja Loka in the years between 1715 and 1727 as a preacher and leader of the procession – penitent piety on the day of Good Friday. Here, father Romuald wrote, in 863 rhymed verses, one of the most beautiful dramatic poems in Slovenian literature.

For the penitent procession in Škofja Loka, he wrote the text that in the twentieth century became known as the Škofja Loka Passion Play. The manuscript codex in which the text is preserved was written in the time between 1725 and 1727. The text of the Škofja Loka Passion Play itself was writen by father Romuald around or soon after the year 1715. When he started to write and adapt, the tradition of Slovenian religious drama was already more than a 100 years old. This tradition has subsequently been lost. Our critical edition sets up the Škofja Loka Passion Play as a manuscriptive and textual artefact in which it strives to discern as many traces of the lost tradition of Capuchin religious drama as possible. This could be done primarily on the basis of nine preserved documents that accompanied the codex, published for the first time in this edition.

A special enrichment of the internet edition is the inclusion of video recordings of the performance of the Škofja Loka Passion Play from the year 1999 and their synchronised presentation with the text.