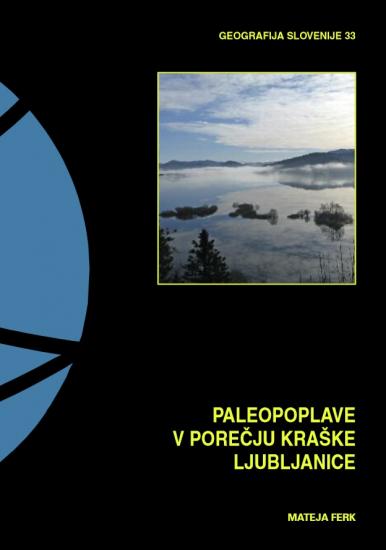 
The scientific monograph ('Palaeofloods in karstic Ljubljanica River Catchment') presents a research on palaeofloods in the main water confluence in the Ljubljanica River Catchment, namely the area between the Pivka Basin, Cerknica Karst Polje, and Planina Karst Polje. Several geomorphological forms genetically related to floods have been identified, e.g. floodplains, river terraces, corrosion notches on cave walls, as well as laminated fine-grained sediments. Since they were found at higher altitudes than the present floods reach, they were considered as palaeoflood features. Morphometric analysis of the studied geomorphological forms was used to determine the volume of palaeofloods and their altitudinal range. The hydrometric characteristics of the palaeofloods where calculated by computer modelling. Petrological analyses of fine-grained sediments from the surface and caves were used to determine the origin of sediments and their settling velocities, hence to prove their flood origin. Furthermore, morpho-chronological analyses with radiometric methods 14C and U-Th on flowstones interlaying with flood sediments where carried out. The results show that the volume and altitude of palaeofloods throughout the study area fairly exceeded the highest known recent floods.

In the Pivka Basin three palaeoflood periods were determined showing a decline of palaeofloods' altitude through time. Although palaeofloods reached higher altitudes, the dynamics of palaeofloods was similar to the dynamics of recent floods: laminated fine-grained sediments were deposited from suspension during palaeofloods, which is also characteristic of recent floods in the Pivka Basin and of other karst poljes of the Notranjska Region. Laminated material confirms periodical flooding, while its depth and thickness prove the durability of the processes, contradicting older theories which assumed the karst poljes where permanently flooded in the past geomorphological periods. In conclusion it was established the Ljubljanica River Catchment developed in several stages, with changing dynamics of the geomorphic processes reflecting palaeoenvironmental change in the Quaternary.