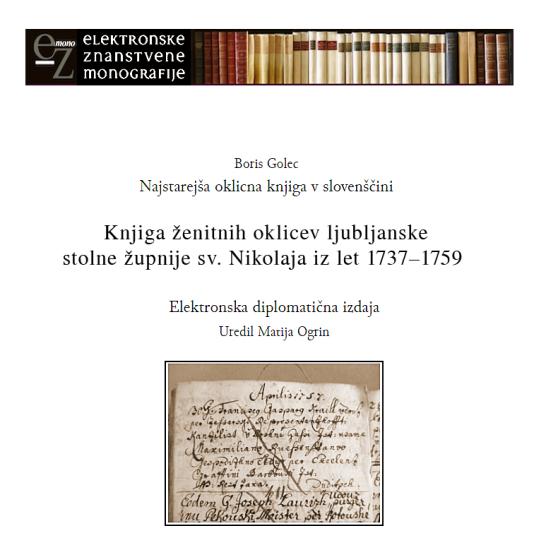 
Books of marriage intentions in Slovenian were largely neglected in the research of older Slovenian official documents, as preserved copies emerged late. The oldest preserved book of marriage intentions in Slovenian was created at St. Nicholas in Ljubljana between 1737 and 1759 and contains 2319 proclamations. In this monograph, the text of the entire manuscript is published in a diplomatic transcript, with indexes of: 1) household, occupational and kinship names, 2) toponyms, and 3) names of micro-locations in Ljubljana.

The manuscript book is an important document of the 18th century as it contains a record of speeches intended for the general public, as they were heard from the pulpit of the Ljubljana Cathedral. The documented language of the cathedral clergy reflects not only linguistic peculiarities, but also a wealth of Slovenian urban toponymy and anthroponymy of the time, as well as the social structure expressed in all attested shades of addresses and names. The utility value of the Ljubljana intentional book is all the greater because it deals with the urban environment with its colorful palette of residential and professional denominations.