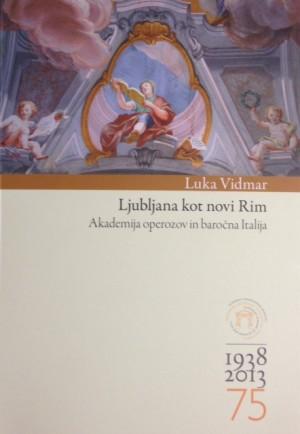 
The book Ljubljana kot novi Rim (Ljubljana as the new Rome) marks the 320th anniversary of the establishment of the Academia operosorum Labacensium as well as the 75th anniversary of the erection of the Slovenian Academy of Sciences and Arts. It presents the attempts of the Baroque Academia operosorum to develop Ljubljana, the capital of the Duchy of Carniola, into a regional cultural centre modelled upon Italian centres such as Rome and Venice. With the term ‘new Rome’, the title of the book alludes to the ambition of a series of capitals from late Antiquity to the twentieth century to appropriate the legacy of Rome, the Eternal City. So too, around 1700 Ljubljana became an important city, a ‘small Rome’ on the border between the Holy Roman Empire and Italy, precisely by claiming a special connection to the Eternal City.