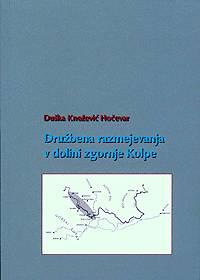 
This monograph (Boundaries In the Upper Kolpa Valley: Native Imaginings of Nation And Locality) deals with the issues of belonging, identity and social boundaries among the members of ethnic groups, which is by no means a novelty in social anthropology. Explicit studies on these topics date back to the 1970s. Yet the border-boundary topic has been implicated in several anthropological classics of an older date; delineations of ‘cultures’, ‘societies’ and ‘tribes’ have been on the anthropological agenda since the very beginnings of the discipline. After the ‘fall of the Berlin Wall’, an important bulk of social anthropological dealings with ethnicity has been occupied with the new European situation. A certain prominence has been awarded to the debates on international borders in ex-Socialist European states. Within such an anthropological framework, the monograph discusses the understandings of the ‘newly’ established international border between Slovenia and Croatia (1991) in the locals of this border region. (Self)understandings of national identities in the locals of the Upper Kolpa valley and the managing with their (self)ascriptions is the central theme of the monograph. Following some recent emphases in theory of ethnicity the monograph clarifies the impact of the new political border on the various understandings of local ‘national’ identities.